3 Reasons You Should Learn to Use a Mic 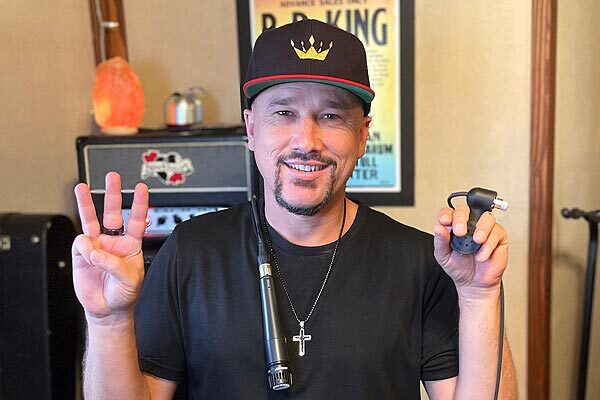 1. To get that badass, distorted bluesy tone . If you want to achieve this sound there are basically 3 components:

Getting an airtight cup around the mic to overdrive it

Amp choice (or alternatively plugging into a pedal to simulate an amp which gets plugged into the PA.)

2. The second reason to consider learning to use a mic is in order to be heard among a large group of people .

If you’re playing for friends or family in the living room, a mic may not be necessary, but once you get up the courage to play at an open mic at your local bar or coffee shop, you’ll likely need to play into a microphone in order to be heard by the audience.

In this scenario, you’ll most likely use the microphone plugged into a PA that’s provided by the house.

3. Another reason to use a microphone is to be heard among other musicians .

As soon as you add a bass and/or drums into the mix, the overall volume of the music increases a lot, and you’ll need a mic to be heard at all, even if it’s just a jam session at your buddy’s garage.

In this case, if a PA is available, you could go with playing into a mic that’s plugged into a PA system (as in our open mic scenario above) OR you could venture into the 3rd reason to learn to use a mic.

If you’re a lover of the electric blues sound, then at some point you’ll probably invest in a mic and amp, even if you never play in front of people or with other musicians, but just because it’s fun to play with that killer tone.

Do you understand the difference between ACOUSTIC and AMPLIFIED harmonica?

When you play into a mic plugged into a PA, we call that ACOUSTIC playing (because even though the PA is technically amplifying the sound, the end result is simply a louder version of the acoustic harmonica sound).

By contrast we call it AMPLIFIED harmonica when you’re going for that distorted bluesy sound that’s typically achieved by playing a bullet-style microphone with an airtight grip into some version of a guitar amplifier.

BTW . I’ve just been testing out this Shaker MadDog mic. Here’s my quick take on it…

What I love about it:

It’s probably the smallest and lightest weight harmonica mic out there, comfy to hold , and allows you to get more hand wah effects to translate better than any bullet style mic

Plug it into an instrument cable for a smoother clean-ish tone .

Spend another $45 and plug it into a ¼ inch male to XLR Male ($30) into a matching transformer ($15) and it becomes a badass distorted sound that competes with other bullet style mics.

The cable is permanently attached to it , which makes it less tidy to put in my harmonica case.

It’s so light, and with its plastic construction, I worry about long-term durability taking it into clubs and bars.

Who’s this mic for? I think it’s perfect for players who like to use hand wah and are frustrated with the way bullet mics don’t translate hand wah tones into the electrified world.

It’s also probably the most ideal mic for someone who only has functional use of one hand, but is wanting to get a distorted tone.

The Shaker MadDog would be a great mic for beginners to consider.

Wanna hear it in action? Check out my video review .

What is the competition?

tight budget , Bottle of Blues is the cheapest I’m aware of

What do YOU think about playing with a mic???

I’ve been playing with vocal mics since 2019 when I did a karaoke session during choir. I mainly use them because it’s what I have available and it’s the sound that I’m after. I like to call this sound “clean amplified harp” as compared to “dirty amplified harp” like the Chicago sound. I’m actually going to play with a band sometime soon and I get to use the PA. I haven’t played with one since June of last year. I’m so excited to start doing live performances again.

Ooh I’m so excited for you! And for those who are gonna get blessed by your awesome playing! Keep us posted how it goes… CHEEEE HOOOOOOO!!!

Luke,
I have a bullet mic. I have large hands but can’t seem to get the seal needed to really ‘wah’. Any suggestions?
Ricci

Hey Ricci @stchamps2002 - yes, that’s the nature of playing amplified vs. playing acoustic. You have to rely much more on your mouth and less on your hands for that wah sound. Though a smaller bullet like the Bulletini COULD help.

Have you considered the Mad Dog? Thanks brother! I’ll look into it.

Luke - a major reason l recommend the Shaker is because many people (particularly ladies) have smaller hands.
Robert
London