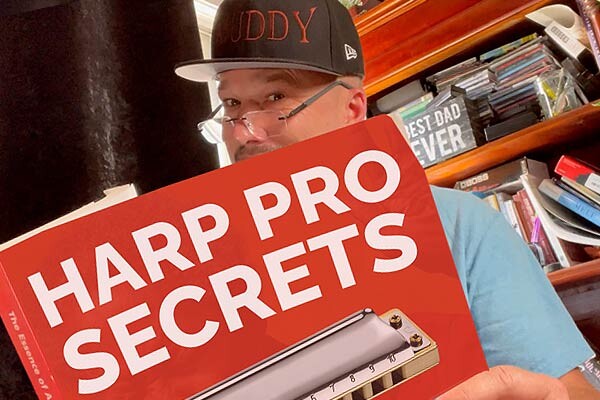 The difference between the sound of YOUR harmonica playing, and the sound of the GREAT MASTERS all boils down to…

The details of how they shape their

are what makes the pros sound like…well, pros !

To sound LESS like a beginner, first get the fundamentals down. Then, once you have them down: focus MORE on the details .

Vibrato is one of those details that can add so much magic to an otherwise boring note, and learning how to do it will massively level up your playing.

What is vibrato? First let me tell you the true definition:

Here’s the definition of a sound people mistake for vibrato:

People will often use the words interchangeably, but it’s actually very helpful to be aware of the distinction.

When playing a long note, adding vibrato adds TONS of interest, and even on shorter notes, a couple fluctuations as the note dies out is a common habit of the pros.

On the harmonica, there are 3 methods of getting vibrato style effects :

Throat/Diaphragm vibrato - this is the type of vibrato most favored by the old blues masters, and it can only be done (as true vibrato - fluctuation in pitch ) on draw holes 1-6 (and also blow holes 8-10.)

Put your tongue near the bending position

Using this technique on blows is nice too (I do it all the time!) but it’s technically a tremolo (as it fluctuates only the volume and not the pitch .)

If you’re like me, Throat/Diaphragm vibrato doesn’t come quickly. But here’s a BIG SECRET to getting it: do it slowly with a metronome while experimenting with mouth position . Time very well spent, I can assure you!

Embouchure vibrato - This type of vibrato is most commonly used on bent note s. But I recently discovered it actually can add vibrato to blow notes 1-8 (which I had previously thought was impossible.)

To do it simply move your lower jaw (along with your tongue) up and down . Some people call it the “chewing” technique to achieve vibrato.

Try it on the 6 blow - a note used in blues all the time, but since it can’t be bent, is typically not very expressive. Play it with the embouchure vibrato and notice how you can actually get the pitch to fluctuate ever so slightly! A whole new world…

Hand vibrato - OK, you got me, HAND WAH is not technically vibrato. In fact, while it might have a slight tremolo effect (because it’s quieter when your hand is closed and louder when it’s open), it’s most dramatically altering the tone (from dark to bright).

Still, I mention it here because it gives a pulsating to the note like vibrato and tremolo, and it’s the easiest of the 3 to learn, so a great way for beginners to sound LESS like beginners.

Also you can actually move your hand in a way that gets the pitch to alter. Although this isn’t a common approach, Roly Plat mentions it in his Vibrato Harmonica Lesson, a great resource for further study on the subject. I’ve been trying it, and I think it’s a totally viable approach.

Check out this video of me demonstrating the 3 types of vibrato. If notes, licks, and phrasing are the cake… vibrato is the icing on the cake . (And who wants cake without icing?

One of the first things my teacher and I tackled during my lessons was throat vibrato. I originally started trying to do throat vibrato because I thought that it had such a cool sound to the sound of a harp. When I tried to do it on my own, it sounded more like a volume change more than a pitch change. So I made the switch to cheat a vibrato by using my tongue. During my first lesson with Todd Parrott, he mentioned that Terry McMillan used a throat vibrato when playing. So it was my goal to try the technique again. Now I’m at the point where my vibrato is showing, but I’m just smoothing out the kinks to it to sound less rough around the edges.