Hello, I’m a band leader, lead singer, guitarist, and harmonica player with a band that plays rock, folk, reggae, blues, etc… I’m looking for advice on gear to bring the harmonica piece to our live shows to the next level. The trouble I’m having is that I have not found a way to effectively play into a nice harmonica mic while I’m playing guitar. I have tried various head/neck racks and they are Ok for our folk songs but I can’t really get the attack and tone I want for my rock/blues solos. Plus, even after all these years of using them, it’s still hard to get the positioning right to go back and forth from singing into a mic then blowing the harp on the rack into the mic (I have used another mic on another stand to get some different effects and separate mix). I am currently trying out the Harparatus on my mic stand with a Shure SM11-CN Miniature Dynamic Lavalier Microphone (below my vocal mic). This is the best solution I have found so far, but the mic stand still isn’t stable enough for me to really wail into the harmonica without taking it off the stand, and then I need to blow into my vocal mic instead of the SM11 (because of the weird positioning), which defeats the purpose of having a separate mic and harmonica channel mix. Now, my band is a 5 piece and we have another guitarist, so I am able to stop playing guitar when I take a lead harmonica solo. However, ideally I would like to have my harmonica on a stand so I can play it hands free some of the time, but then grab it (and stop playing guitar) when I take a solo. I want to be able to mic it with a nice harmonica mic (bullet style?) and run it through an amp simulation pedal so I don’t have to set up and mic another separate amp. My questions to the group are:
Is there a harmonica mic/stand combo that will allow me to play hands free some of the time, then play with my hands cupped around the harmonica and mic for solos?
Can you recommend a variety of harmonica pedals to get sounds for blues, reggae, folk and rock without using a separate harmonica amp?

Many Thanks!
Erik Johnson
The Johnson Party

Have a look at Rackit! Harmonica Microphones by BlowsMeAway Productions for a potential mic solution.

Have a look at https://www.hunterharp.com/store/ for patch sets to help multi-effect pedals be more useful for harmonica

Thanks Maka, both the Rackit! and patch set look like great options for me. I think I’ll pull the trigger on the Digitech and patch set now. I really do like the Rackit option a lot but my ideal situation would be where I can actually hold the harp and mic in my hand during a solo, then put the mic and harp back on a stand after the solo. I might try getting a bullet-style mic and harp holder and mount it underneath my Harparatus…
Wondering what bullet-style mic folks prefer?
Thanks!
Erik

Erik,
You’ve got lots of options!
“Ammo Clip” makes bullet mic holders for mic stands (Amazon and lots of others carry them).
My bullet mic favoured options used to be centred around Shure 520 Green Bullet (although the current 520DX isn’t as good as the old ones) and the Astatic JT30. The Hohner Harp Blaster has had some pretty good reviews, but once I played through a Bulletini (from Blowsmeaway) the others don’t get a look in! Definitely my favourite harmonica mic, although it is no good for vocals.

Given that you’re trying to juggle vocals, harmonica and guitar (without too much specialised gear for each), I wouldn’t bother with a bullet mic. My suggestion would be to run the vocal mic through the Digitech into the PA. You can run it ‘clean’ for vocals and footswitch to your favoured emulation for harmonica. The Digitechs are designed for a ‘clean’ input - NOT like what comes out of a bullet mic. The guitar and its amp can work independently.

As for having a convenient storage place for the harmonica, I use a pop filter stand (designed to clamp onto a mic stand) with the pop filter removed and a plastic tray from our local sushi takeaway gaffa taped onto where the pop filter would go. A sushi tray is exactly the same width as a diatonic and the small takeaway tray holds around six harmonicas! Every time the plastic tray cracks (about once a year), I just gaffa tape another tray on top of it – so it gets stronger as the years go by!

Wow, Maka! Thanks so much for sharing about the Racket! here. That’s so cool. I’d been wondering what contraption Juzie Smith was using to get that distorted tone. I’m thinking hard about picking one of these ups!

Hey Erik - Yeah, I haven’t actually played a Bulletini yet, but from what I’m hearing that is probably your best bet, if that’s affordable for you.

A couple of other options to consider here…

If you’re never playing guitar while playing through the bullet mic, you could just pick up a simple switcher pedal like an A-B pedal or an A-B-Y pedal so that you could plug BOTH your harmonica and your guitar into the same amp.

Years ago when I played both instruments in a rock/fusion group, that’s a variation on what I did (I have a 1972 Marshall 20W PA head with multiple inputs for my guitar amp, so I just plugged my mic that had a volume control/off switch on it into one of the inputs, and my guitar into another.)

Also, instead of a separate mic stand, what about just some kind of shelf on your existing mic stand?

Just noticed this on the blows me away website all the way at the bottom of the page, if you do end up getting a bulletini: 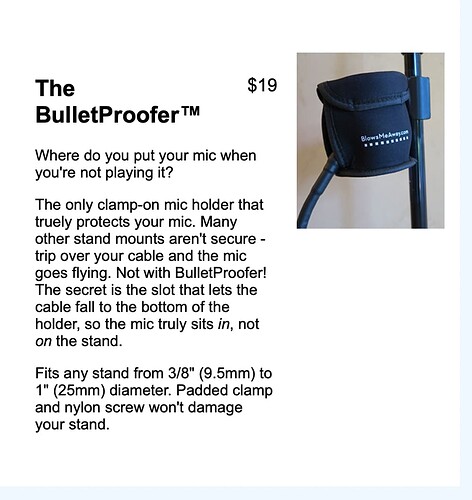 I’m a little confused, It seems like maybe the Rackit! is made to work with this:

The Farmer Harp Holders, designed by Pete Farmer, utilize the power of magnets to revolutionize the traditional hands-free harmonica holders.

At any rate this looks like a beauty of a harmonica holder. I definitely want to check one out. I’m waiting to hear back from Greg at BlowsMeAway to clarify this for me. Rock on y’all!