Hohner Special 20 in Db / Bad Luck or a Stroke of Luck? 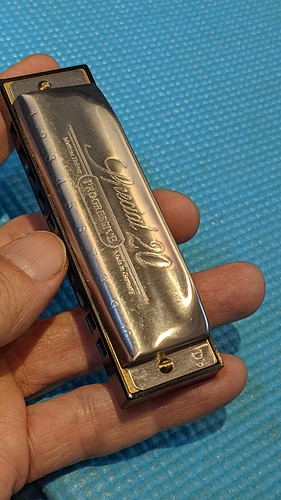 Since blowing out my 4 draw on my trusty Easttop “C” harmonica a month and a half ago, I have had to learn how to play the upper register to be able to reproduce many of the songs I have learned. While at first it was quite a challenge and I didn’t particularly like the sound of the higher notes, with some perseverance and excellent advice from @Luke and others on this forum, I have gotten better at isolating single notes and negotiating the tricky 6/7 draws leading to the upper register. It seems to me that not having the D and Db notes on the middle part of the harmonica forced me to learn more than I would have otherwise.

While I did my best to mask my initial disappointment at not having it in the key of C to replace my blown Easttop, over the last several days I have learned a thing or two which might help others.

First and foremost is that hitting the bends on my new Special 20 is definitely much easier than on my Easttop 008k, which I previously thought was the greatest thing in the world.

The second thing is that magically the great majority of the songs I have learned to play in the key of C actually don’t sound too bad in Db and some seem to sound even better on my new harp.

The whole idea of different keys was at first confusing to me and I thought that if a song was in a particular key that it wouldn’t sound right in a different key.

I had lost my blues scale with a hole right in the middle, with no D or Db, and now I have a whole harmonica full of them and am enjoying the heck out of it!!

Is it just dumb luck because Db is only a half tone away from C, making this so, or will this happen across different keys as well?

I’m interested to hear from others regarding playing songs they know in different keys. What is your experience?

Happy holidays to all!

There nothing magical about the key in which a song/melody was originally composed. It is really more a question of personal preference (or might depend on a singer’s voice range, or the particular instrument that the composer played or liked).

You can play any melody in any key and it is still the same melody and is still identifiable by any listener who knows the melody. It is just shifted up or down in frequency.

At first I thought it was imperative to have a certain key for the song being played.

Now I realize that the key is likely most important if we are playing with others and don’t want to be “off-key” , but perhaps perfectly alright to play any key if we are just playing on our own, or just fiddling around.

What a wonderfully magical instrument!

You are exactly correct: the key in which a melody or song is played is only important when playing together with other musicians or singers.

There nothing magical about the key in which a song/melody was originally composed. It is really more a question of personal preference (or might depend on a singer’s voice range, or the particular instrument that the composer played or liked).

Hey Slim - there really issomething magical about specific keys, though. Every key has it’s own vibe. When writing and arranging, it’s a consideration. It’s like, “yeah the song is easier for you to sing in this key, but the song just sounds better in this key.” Changing the key literally changes the whole vibration of it.

Good for you for using your setback as an opportunity to grow in a different way. Keep on trucking man!

This makes a lot of sense and makes me anxious to play in other keys!

Even with a half step change from C to Db, I can tell there is a different vibe and while some songs do sound similar or even better, others definitely do not.

While it’s still not easy for me to tell what key a song is actually being played in when I hear it, I’m getting much better at picking up on the melodies and reproducing them, even if I am in a different key.

Yesterday someone sent me a video of the “Dueling Banjos” song in the movie Deliverance from way back in the day and I’ve had a blast playing different parts of the song using different octaves for the two instruments being played.

I’ve never had so much fun listening to music and trying to recreate it on the harmonica. That being said, like you say @Luke, the different keys are like different flavors in an ice cream shop, each adding dimension and depth.

THANKS FOR HELPING TO BRING THIS AWESOME INSTRUMENT TO LIFE FOR ME!

And yes, playing my new Special 20 is a wonderful new experience. I can’t wait to see my other daughter in a few days and with any luck to try on Lee Oskar in A for size.

Hello @HarpinBobbyMcB, I’m really excited for you to read this AND read from you. What you are currently discovering, I should already explore through my various harps and the complete set of fenders and it is so much fun to test. Where does a harp in a different key make sense, where doesn’t it? It will be a new level for you because you liked to accompany melodies to the radio before. Many greetings from Astrid

Because I wear hearing aids, the #7 hole on the “C” harp and above are very unpleasant to me and I really want to be able to play “Happy Birthday” so bought a “A” and “Bb” harp and really like the tone of the Bb. Now just need to practice practice practice to get it down without any mistakes. That might take me awhile tho . . .

What @Butch has noted is what I mean about there being nothing magical about the key of a song. It is really personal taste. Some like very high pitches so they will play a song in the same key, just raised an octave.

@Butch is not one of those people – and that’s cool.

As far as “vibes” go, that is even another example of personal taste/preference. My vibes are not necessarily the same as those of Claude DeBussy or Willie Dixon, although I do admit they most probably have a better “musical taste” and “musical feel” than I.

Hmmm … I wonder how many times before this the names of Claude DeBussy and Willie Dixon have been used in the same sentence?

Saying the above is not really much different than describing anatomical and physiological (and cultural) differences between people: none is “better” in an absolute sense, and we should remain open and accepting of the differences, as long as they are not harming any one else.

Once I learn a song I try to play it in several different keys, you are right some of them do sound better, fun to experiment. I also agree about the special 20’s. I have a seydel that has a great tone but not so easy to bend. Enjoy your new harp!