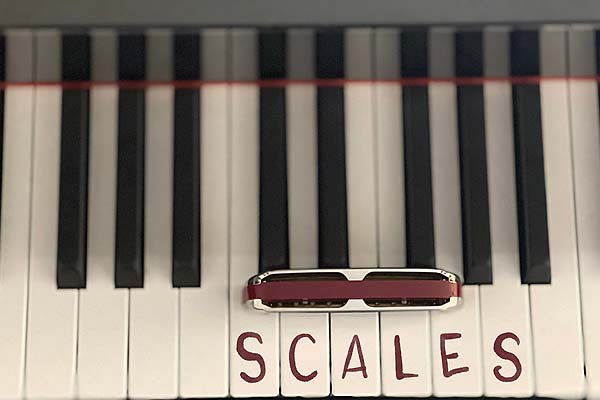 In another post I talked about playing harmonica scales in musical ways. But if you’re bored just going up and down a scale, I want to show you a more challenging approach to playing scales: playing a sequence through the scale.

In musical terms the word sequence means “playing a pattern of notes starting at a new pitch.”

This kind of exercise will show you how well you actually know a scale, improve your harmonica dexterity, and give you actual material you can use when improvising.

Let’s take the “Almost” Blues scale, for example, which I demonstrate in my Harmonica Blues Scale for Beginners video. The basic scale has six notes:

The idea here is to play 3 consecutive notes, and then do the same thing starting on a note one higher than the one before, like this:

Start by playing the three note pattern from the first note:

Next, try playing the three note pattern from the second note:

And then the three note pattern from the third note:

Repeat this until you reach the top of the scale, and then reverse it and come back down. You can start by playing the last note long, and then challenge yourself by playing the notes faster, as I show in this short video: Practice that for a week or two and you’ll start to get a sense of how effortless, fun and useful scales can be!

And then check out my post on how to take it to the NEXT LEVEL again with note skipping.

…and awaaaay we go on our never-ending adventure… Wooooo hooooo!