What is a Turnaround?

Can someone explain what it means 2 bar turnaround that marks the end of each chorus cm7 eb7 ab7 g7. I understand 12 bar blues for the most part however I am unclear when I see this in learning material. 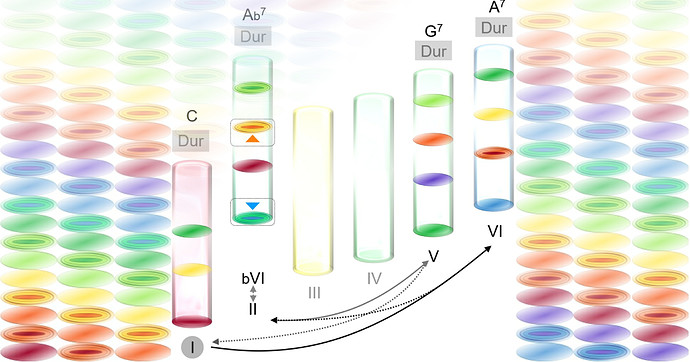 Hey Lisa - welcome to the forum! Happy to have you here. I changed the title of your post to “What is a turnaround” and put it under the “Theory” category. I hope you don’t mind.

So did you have a photo or a link in your original post. If so, I’m not seeing it? Anyways, it looks like you’re working on a Blues in Cm, and you have a 2 bar turnaround that has 2 chords per bar. This is gonna be a little journey to understand where those chords are coming from, so grab a cup of tea, and bear with me here…

A “Turnaround” loosely speaking is some kind of chord change at the end of the tune that creates tension which is resolved by returning to the “Top” of the tune. And so it kind of “turns us around” back to the beginning of the song.

Different songs can have different types of turnarounds. In the 12-Bar blues, the turnaround typically refers to the last 2 bars of tune (meaning bars 11 and 12 of the form.)

In it’s most basic from, the LAST FOUR BARS of the basic 12-bar blues are:

However ending on the I chord doesn’t create any tension that “turns us around” back to the top of the tune, so the most common alteration to this basic blues is to end the last bar on the V chord instead of the I chord, so that now the LAST FOUR bars of the tune are:

Notably, for our discussion, the turnaround is one of the places that gets some real spice. Instead of one chord per bar, we now have two chords per bar (each chord lasting two beats.) So the LAST FOUR BARS of the most basic Jazz 12-Bar Blues is:

So the BASIC JAZZ TURNAROUND is:

As our German friend @AstridHandbikebee63’s link shows there are a ton of common ways that Jazzers like to vary these changes. Here are a few of the most common:

There’s an almost infinite way that you can vary this progression, and here’s a couple of the most important concepts in understanding where the variations come from:

[That’s why the simple jazz turnaround, bar 11, instead of just being C, now has C and Am. because they have the same harmonic function of being the TONIC chord.)

The DOMINANT function is “creating tension” or “asking the question” that wants to be answered by the reolsution of the Tonic chords. These cords are
V and vii (so in C that’s G and B diminished, or in C blues it’s G7 and Bm7b5)

PRINCIPLE #3.) TRITONE SUBSTIITUTIONS: In Jazz, on any Dominant 7th chord that is resolving to a TONIC chord, you can substitute a Dominant 7th chord whose root is a tritone away. “Tritone” is the note between a 4th and 5th. (I can explain the “why” behind this but feel this post already has overwhelming amount of info, lol.) So here are tritone substitutions for dominant 7th chords in the key of C:

So I think now we can finally kind of see where the 4-chords that are in your turnaround are coming from. Looks like you’re playing a Cm blues, so a typical jazz turnaround would be:

I - VI - II - V (autocorrect wouldn’t allow me to do a lower case I, lol) which would be Cm A7 D7 G7, and then making our Tritone Substitutions:
The A7 becomes the Eb7
The D7 becomes the Ab7

And that my friend is where you turnaround is coming from. Hope that helps. LMK if you have any questions?

Luke… Thank you for the lengthy education on the turnarounds and so sorry it took me so long to respond. I was on vacation. I will have to read this few times to digest. but I get the gist. I am really enjoying your forum and learning material I purchased on line. In the meanwhile I will explore the forum more for my questions. Best to you. Lisa

Astrid… Thank you for the information on turnarounds I don’t really understand for I don’t know german. however thank you for taking your time. Lisa

Hey Lisa - right on. Yes, don’t hesitate to ask as many questions as may pop up for you. Any questions you have, guarantee others will have too. That’s one of the great things about our dialogues here on the forum - everybody gets to benefit from it.