I purchased a Hohner Golden Melody Progressive harmonica after some research on harmonicas and since I’m new to playing, wanted to get a good quality harp since I can use all the help I can get. I was just given an East Top T008K so looked up research on them but not alot out there. Assuming it might be a fairly new model maybe? Don’t know but I tried it out and it appears to work pretty good, to me anyway. Just wondering ? ? ? I did find out East End are made in China so the price is about 1/2 that of the Golden Melody. One of the things I love about the Golden Melody is the shape, even tho that has nothing to do with playing ability. The East Top seems easier to draw/blow on the #1 note tho. Thanks for any input on this harp . . . Butch

The Golden Melody is, as Astrid @AstridHandbikebee63 says, an easy to play harp – at least it should be. All of the ones I have owned were excellent and easy to play. So if you are having some problems on the hole #1 draw & blow then I suggest removing the covers and checking the reed gaps to make sure that they are not too large or too small. To see the blow reed gap accurately you will need to remove the reed plate as well because the blow reeds are on the inside of the comb.

If adjusting that does not improve things, then there are other aspects to examine and possibly correct (such as reed shape, slot width, reed alignment, spacing/gap between the slot edges and the reed at the rivet end of the reed), but (unfortunately) these are much more difficult and complicated to jump into until you have more experience doing those on a cheap harp (because it is rather too easy to ruin the harp unless you are very careful).

Thanks Slim, will have a look and see if I can tell what’s going on.

@Butch, I’ve had 008K for about 4 months and so far, so good. Every once in awhile some of the holes can get difficult to blow or draw but usually it’s an

Mostly the trouble seems to work itself out naturally as the reeds “warm-up”… Or it seems to me… Is this a thing? Do they warm up as we play? I don’t know

If it doesnt fix itself, or I don’t fix the I D 10 T error, then I open the cover and give a light twang on the reeds to make sure they aren’t stuck and do a visual inspection as @Slim explains. I’ve not done more than a light push or pull to try and get a reed back in line, but normally they all seem okay.

I love the look of the harp and the neoprene case that hooks easily to your finger or belt.

Thanks for the info Bobby. I like the way the 008K is shaped and the weight. Appears to be solidly built.

Hello @HarpinBobbyMcB,
I missed you already.

Now I first had to read what this
ID error is …

Very nice!
I do it just like you do! If it squeaks at the beginning, it’s because I am not relaxed yet.
If it happens after a long game and the check-up is good for me, I’ll do it as you do and it helps.
Have fun keep going, you seem to be making progress. I am pleased!
Many greetings Astrid

I got a C Easttop T008K and really liked it. I found the deal-of-the-century and got a set of 12 Easttop T008K and a case for about $120. I like them. They are solidly built and feel heavy and solid in your hand. They play well and are air tight. I have several different harps, all Hohner except for these Easttop. I have both wood and abs combs. I have to say, I think I like the wood comb harps the best, but it is a very close race. The Easttop set is allowing me to pick up whatever harp I need to make a full of myself playing to a backing track regardless of the key of the song.

I got my 008k as a gift and it seems fine but I have nothing to compare it to. Good to hear from someone who has experience with other harps gives it a thumbs up

Hey @DonC - welcome to the forum! So glad you’ve joined us. I’m looking forward to checking these out, as so many students are raving about them. Now even more after hearing that you like them compared to your Hohner’s!

That’s interesting. Thanks for sharing this.

I recently decided to test an Easttop T008K and purchased one in the key of D with standard Richter tuning. Here is my mini review:

The initial impression confirms that of @DonC: the harp is rather heavy and the workmanship looks very good. The reed plates are nice and flat and so is the comb, so it is air-tight in that regard. However, the reeds (especially from hole 6 down to hole 1) all have too much air leakage at the rivet end.

The tone was very disappointing: a cheap, tinny sound with little warmth and a slight buzzing sound (even though I could not find any places where the reeds appeared to contact the reed slot sides).

Bending was relatively easy for all normal draw bends (holes 1, 2 ,3 4 and 6) and also for the normal blow bends (holes 8, 9 and 10). However, there was extreme squealing when trying to sustain -2", -3" and -3’’’. If these last three were played very gently the squeals were reduced or absent, but then the volume was much too low for normal playing. Overblow bends were impossible “out of the box” – and given the poor overall tonal quality I decided not to work on the reeds to attempt a set-up that would permit overblows.

I was able to eliminate the annoying squeals on -2", -3" and -3’’’ by using the waxing technique. Some people prefer using varnish, but I find waxing is quicker, easier and less hassle to remove if you do it incorrectly and need to start over again.

I realize that tonal quality is a bit of an individual taste element in evaluating harmonicas, so others may find the tone of the Easttop T008K acceptable. For me, I will not be purchasing another Easttop T008K and will use this one as one of my “experimental” harps (for example, changing the tuning to “Country” by sharpening -5 by a half step, or flattening -7 by a half step, or other types of “testing” modifications that I sometimes do).

I hope that this mini review is of use to anyone looking around for a new harp to buy.

Love this evaluation you give @Slim!

The tone was very disappointing: a cheap, tinny sound with little warmth and a slight buzzing sound

I also got some squealing from my Easttop and thought someone had let out a little pig, until I realized I was the pig in the poke.

Your thoughts confirm the 008k as an option for entry level, but there do seem to be better harps out there as we improve.

That being said, my Blue Blazer has given me a ton of fun, even with a blown 4 draw and squeak every now and again. 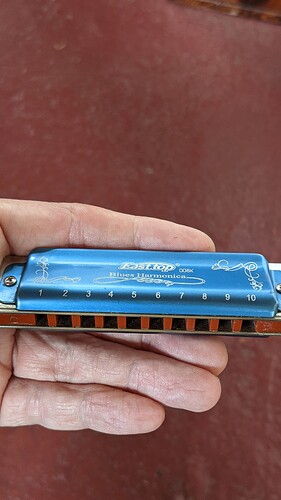 I finally got an 008k after hearing so much buzz about them, and I was pretty impressed with it for the price. I’ll do a lil mini-review sometime, but in a nutshell I find it’s quality right where it’s price is, halfway between a Fender Blues Deluxe and a Lee Oskar or Special 20.

Great review. Much more extensive than mine. I played my Easttop harps until I got my hands (and budget) on Hohner Marine Band 1896. That is now my preferred harp.

You mentioned something about “waxing technique” against varnish. I don’t understand any of that. Can you elaborate or send me to a link that explains what is is and how to do it and why?

Will do but next week – I am on vacation in Spain right now and the explanation is rather long, so I prefer doing that on my desktop computer as telephone typing is a real drag (for me). So until then …

I can wait. I agree with you - phone typing is an excuse to make typos

I finally did a lil review of the East Top 008k!