My China Doll sang the blues

Hello my fellow harmonica players. I had to put down my best friend last week. China Doll was an English bull terrier that my world revolved around for 16 years. Mirror image of Spuds Mckenzie her eye patch was on the opposite side.

For close to a year she stuck by my side while I practiced. The night before, I carried her outside and laid her down on her regular spot next to me. She was crying softly. Every breath she would sing out and I quietly played along with her. After a while she was able to sleep. I carried her back inside and put her in bed for the night. I went back outside and played the blues on my rocket while I dug a hole. If it were not for my harp I would have lost it. Instead I gained a deeper understanding of the blues and sent my little girl out in fashion.

Please tell me about your pets and how they inspire you.

My condolences @HvyMtlHarmonica420 You found beauty in grief, well done. Take good care of yourself

My condolences
Dogs are great company … enjoy those memories

Your story is touching. Like most dog owners, I too have had some of my best friends pass to the other side.

My most recent were a yellow lab named Sneaky and her mongrel son Rascal, whose father’s race and lineage were questionable at best.

For Sneaky, when she could no longer get herself up and out of the messes she made, I called the veterinarian and she came over on a beautiful afternoon just before sunset. I hade bathed Sneaky and her near white coat shone as she laid there basking in our love and attention. As the vet administered the drugs and explained what would happen. A couple of Macaws even came by to join in our farewell to her. I have been witness to a few deaths, and this one somehow seems to have been the most “humane”, at least up until a few years ago when her son Rascal faced a similar fate.

When Rascal reached the same point as his mother and was unable to get up out of the messes he made, I called the vet once again, but this time, due to travel restrictions with Covid, she couldn’t come right away. So instead, I simply decided to dedicate the next several days to Rascal, taking care of him.

When I got up in the morning, I would clean him up, dry him off and then carry him to where the sun would warm him. If it started getting windy or rainy, I carried him to a more sheltered area. By this time he wasn’t eating anything and I was helping him drink some water with an old syringe without the needle to keep his mouth moist.

During that time the vet called and said she could still come if I wanted. Since he hadn’t eaten for several days, I told her I would just wait it out. She explained to me how his body would just gradually shut down. And so I waited and watched as he slowly slipped away. Amazingly even without eating, and drinking very little, they keep pooping and peeing, so I just kept cleaning, washing and drying.

When he finally took his last gasp, I was by his side, ready and was able to give him a proper burial.

The whole process of both his and his mother’s death have helped me to understand death perhaps better than any other deaths I have witnessed, including those of my parents.

While I didn’t have a harp at the time to accompany me in the process, I can see how it could help tremendously. Thanks @HvyMtlHarmonica420 for sharing your story.

Any man who has those feelings is definitely NOT an Asshole.

Thank you everyone, it truly means a lot to me. I was told that I needed to talk about it to help me grieve. I had a very similar experience HarpinBobby. She for the first time in her life refused to go for a walk a week prior. Two days later she stopped eating and drinking. The next day she wouldn’t get up to go outside to potty and I carried her in and out. I used a syringe that came with some liquid baby aspirin to give her small amounts of water every 15mins. The last 3 nights she had accidents in bed and I cleaned her up and washed bedding. When the vet came I had carried her outside and laid her on her bed in the sun. She didn’t move a muscle as the vet examined her. When she got the first shot which was a strong pain killer. She came to and I was able to say my goodbyes and get my last doggy kisses. Then she fell into a deep sleep and was given the final shot. I cleaned her up one last time and laid her to rest. It was all very peaceful. 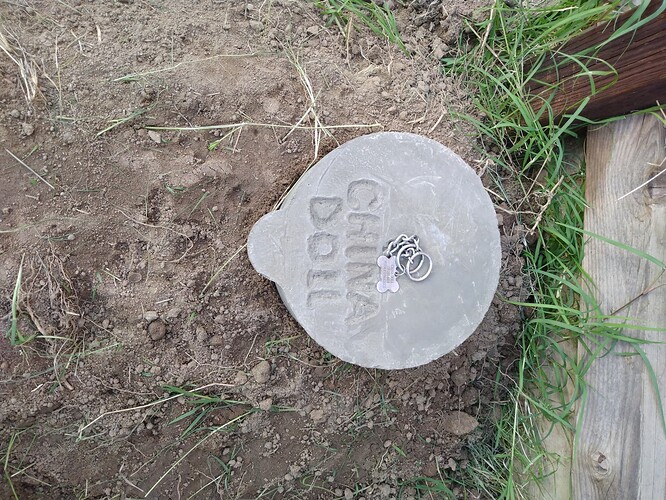 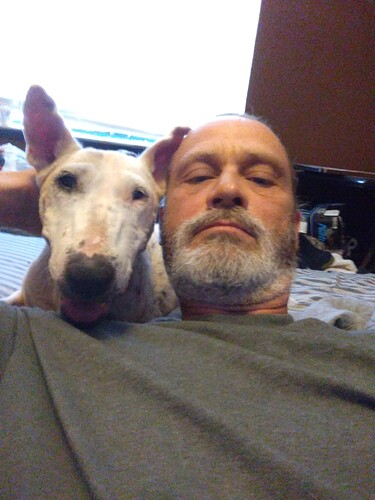 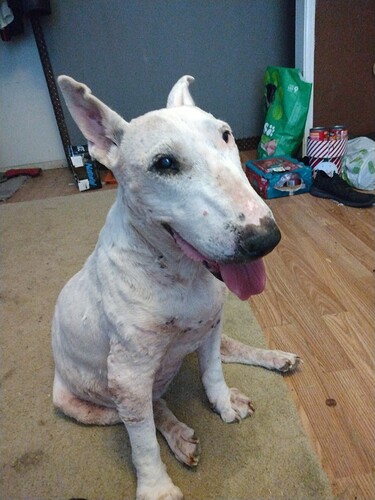 Thank you, that all started my very first day of school. I have a ridiculous German last name, Grassel. The funny thing is in my high school history class we were given an assignment to find out what our names meant and their origin. Grassel is old German for a mean spirited greedy person. An asshole lol

You can imagine how the class reacted to my presentation. I just owned it since then.

Hi @HvyMtlHarmonica420 an arse. Hole tells people that they are good blokes. I won’t hassle you, but feel free to contact me if you would like to speak to someone on a deeper level. I have lost a lot of people over the years. Parents, siblings, friends. The only ones that left what I thought to be holes were, two dogs, a cat, a budgie, and the incredible beautiful entity that is my oldest sister. It took me a while to work out that they are not holes I feel but where I carry them. Catch you around Ass Hole

Thank you Stone, I promise I am not really an asshole. Although I do have a bit of an extreme personality. I can ride any motorcycle like a boss, I trained to be a cage fighter, lived in an MMA gym, and slept in the corner of an MMA cage for several years. I coached amateur and pro fighters for cardio, strength, and endurance. I made bad ass mfrs puke their guts out and cry for their mommas. I ran two classes 4days a week teaching martial arts and fitness to special needs children before COVID forced me to close them. China Doll was our gym’s/team’s mascot.

Many times I have had people pull me aside and question why I go by that considering the good guy I am. Or why I tell people to call me that. It just gave me really thick skin and made me slow to anger. Most people think it’s hilarious and I agree.

I have had my fair share of loss. My Dad died of cancer two years ago. Since then I have lost two uncles to alcoholism, a nephew to fentanyl overdose, and a lifelong friend to a brain aneurysm. China Doll and I were just so close that is what makes it harder to deal with I think. I really do appreciate you being so kind.

Hey @HvyMtlHarmonica420 An ass hole would never have started this thread, which I believe will become very popular. Our strengths gives people like us the power to show our vulnerability.
You have an open invitation to PM me anytime

DOG is GOD spelled backwards…
God gave us Dogs to comfort us in times of grief, to be companions when we are lonely, and to love us anytime.

It is truly amazing that dogs can sense our feelings and communicate with us. It is amazing that they know when we stand up from our chair in the house with the TV Blaring or Music playing and start toward the back door. The come through the doggie door before we take 4 or 5 steps…How can they know…They seem to have an unbelievable knack of knowing what we are thinking, or what their brothers and sisters are going to do or want. If you give them love, they return it many times over.
They jump in our laps and lick our faces when we are sad…They lay at our feet or climb in our lap to sleep when we are tired or lonely.
We have a Shorkie (Yorkie Shih-Tzu mix), a mixed Short-Hair Border Collie, and an Heinz 57 mix. All were rescue dogs. We have had dogs for about 30 years, and have received nothing but love and affection from all of them. They have brought nothing but happiness, but, as your China Doll, they are gone too quickly. I have to believe that God takes them to Heaven. God Bless You!

Greetings @HvyMtlHarmonica420. I am so sorry for the loss of your faithful friend. You were a good team!
Anyone who has owned or owns pets can understand your pain! It’s always sad to see them suffer. But unfortunately, death is part of life. It is important that we are there for them and that we reduce or spare them their suffering. Our animals are always there for us when we are not feeling well. On her final journey, we return our gratitude to her.
You’ve done everything right! As does @HarpinBobbyMcB and others!
It is also good that you describe your grief here in the forum as it will help you.

Hello @HvyMtlHarmonica420,
good that you explained why you always sign “asshole”! I found it a bit confusing.

Since I was born in Germany and live here, I know many last names. I have to say that I’ve never heard the last name “Grassel”.

They seem to have taken him to your country… Maybe because of his bad reputation?

With this in mind, greetings from Astrid

Thanks Astrid, If I didn’t know better I would likely think the same

My Grandfather came to the US as an orphan after WW1 with 5 siblings. They were taken in by an Uncle living in North Dakota. He moved to California during the great depression. He joined the Army after the attack on Pearl harbor. Drove a tank in the 2nd armored division (Hell on Wheels). He was very well respected here. I still live close to where he settled after the war.

Thank you to everyone for reaching out.

Hey there @HvyMtlHarmonica420 how are you doing bro?

@stonestone63 a lot better today thank you. One of our customers had a litter of puppies and I laid down and got covered in kisses. Just got off work and heading home. Time for chicken tacos, strong beers, and the blues.

How are things on your end?

About a month ago I was doing a job. As I was setting up our truck a I saw this little Yorkie heading out into the street. I dropped my gear and ran out to pick him up. I could tell he had many years on him. As I was loving him up his owner came out frantic looking for him. I called out and said he was with me. We talked for a minute and I showed him my phone’s homescreen which is a pic of China Doll. We traded a few stories before my boss came out pissed and I had to go back to work.

I did the job and rolled up the truck. As we were about to drive off he came running out to stop us. And handed me this painting still wet. 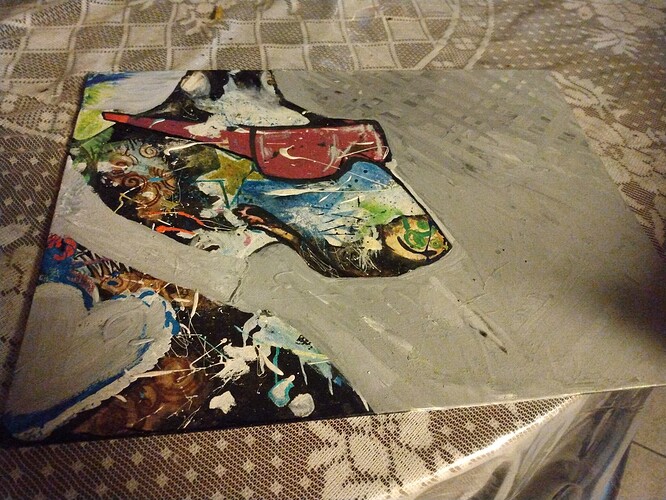