While there are many excellent reviews here on this forum and on the www for many different harmonicas, including my first three acquisitions, here is my humble opinion from a beginner’s standpoint for my three harps. 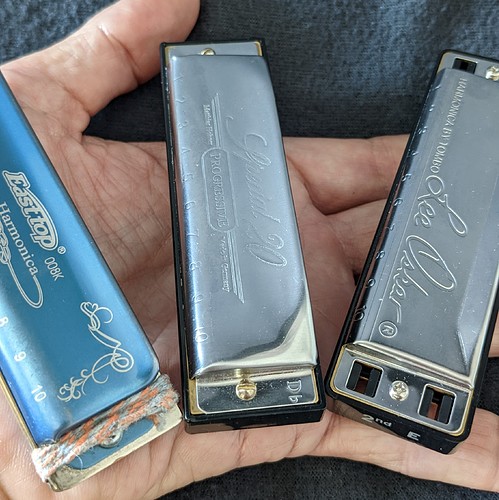 For my playing, which primarily consists of learning melodies of songs both new and old along with several kid’s songs, they all sound pretty darn good

. As my ability to isolate notes improves, all three seem to do the trick. If I had to pick a winner among the three, I would probably choose the Special 20, though in my opinion, technique seems to be much more of a determining factor than the actual harmonica. I’m sure experts, like @Luke and others on this forum, are better qualified to hear the nuances between the three. 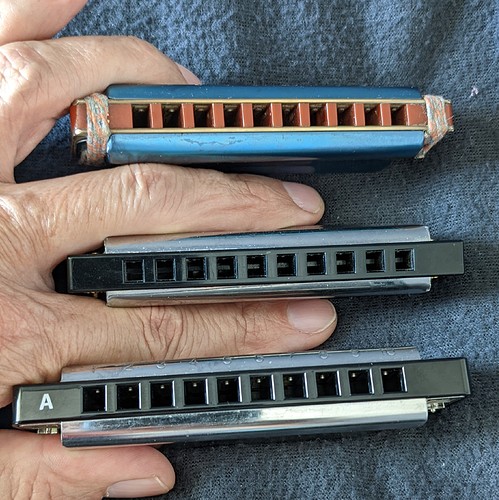 Here I give the edge to the Special 20, which seems to bend and play most consistently right out of the box, though granted I’m still unable to hit specific bends with a great deal of reliability. I had to tweak several of the holes on the 008k in order to get them to play right; and the Lee Oskar seems to have had a wider gap on the two draw out of the box, which made it easier to hit the 2 draw half step and full step bends, but required much more effort to get a solid 2 draw note (E on my A harp). The Easttop 008k has been the most difficult to bend with the exception of the 4 draw, which I eventually blew out, probably by trying much too hard on my Blue’s scale.

Here I actually give the nod to the least expensive of the three, the Easttop 008k. I love the bluish, almost turquoise color, and it is also heavier and feels much “stronger” and better built, kinda like a tank which has literally taken a beating and keeps on ticking. Both the Special 20 and the Lee Oskar seem much lighter and more flimsy, though this certainly doesn’t seem to effect the sound. 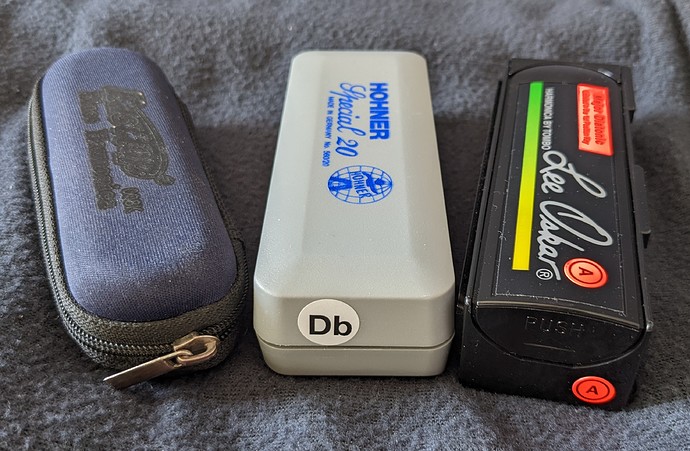 Again here my favorite is the 008k which comes in a zippered nylon case with an elastic band on the back which fits well on a belt or even on a finger for easy storage and access. I can’t really see carrying around either the Special 20 or the Lee Oskar case, though certainly both are likely perfect to keep them dust free and clean. I’ve opted for carrying my Lee Oskar in the key of A in my left pocket, and my Special 20 in the key of Db in the right. I’m sure though this isn’t optimal since they are likely much more subject to lint and other dirt getting in them.

I forget who it was, but someone else here in the forum said the Lee Oskar was a moustache grabber and mine did in fact give my moustache a few tugs. As a side note, my ten blow went out in my Special 20, and I after opening her up, I found a renegade moustache hair to be the culprit (since then I have shaved my moustache, gotta establish priorities!)

. Overall, I have found all three to be pretty much equal in terms of comfort. 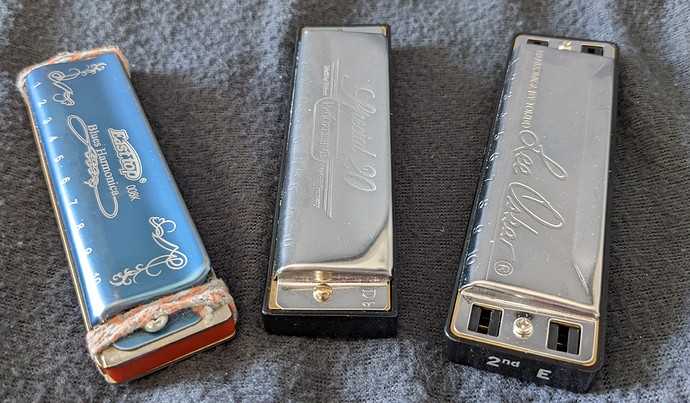 For my level of playing ALL THREE are great and have given me hours of playing pleasure! I really enjoy the lower tone of the Lee Oskar in A, and while the key of Db on the Special 20 wasn’t what I originally wanted, I also have been loving it. I still take my 008k for a spin every once in a while but am basically limited to playing the higher or lower octaves since my 4 draw no longer works. Likely for more advanced players, who do lots of bending or Blue’s playing, the Special 20 or Lee Oskar are much better, but for me, all three do the trick and are well worth the money!

I only play Lee Oskars at the moment, so those are the only ones I can talk about

How is the Special 20 labeled on the harp itself? (part of the reason why I chose Lee Oskar over Special 20 was because I love the way Lee Oskars are labeled

The Special 20 harps have the key of the harp stamped into the right end (high end) of the top cover (visible in the first and last photos above). This is the key of the +1 hole and is the key that you would be playing in when playing the harp in the so-called first position.

For better and quicker visibility I usually attach a sticker of that key on the high end of the comb (the same position that Lee Oskar uses to indicate the key of the harp when it is played in the 2nd position, as on the Lee Oskar harp in the photos above which shows 2nd E).

Thanks @Slim, I see it now

Here’s a bit better picture to visualize what @Slim so accurately says: 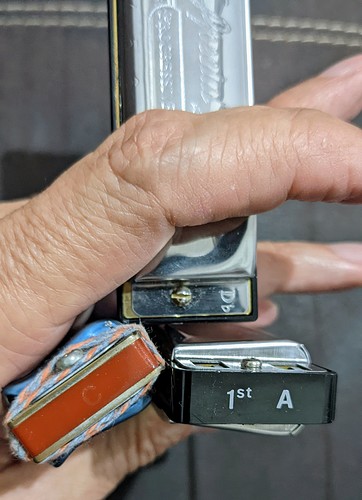 and as many have said a big advantage to the Lee Oskar is visibility of both 1st and 2nd position keys. I’ll have to see how they hold up over time, but they are definitely much more apparent from the get go!

Since I’m not a pro and do not play in bands, for now anyway

, this isn’t such a big deal. I do like @Slim’s sticker idea

As a side note, I considered buying a full set of the Easttop 008k’s or a lower end version which came in different colors, which look really cool. Since I’ve heard so many good things about the Special 20’s and Lee Oskars, I decided to give them both a try before investing in a full set, and I’m glad I did! There seem to be many great harps out there, so I may even continue to experiment as I go forth into new keys.

By the way, finding the moustache hair on my 10 blow on the Special 20 didn’t come right away. After taking off the cover plates (kinda scary on a new harp), I gave the troubled reed a push, thinking it was stuck, but still got no sound. The spacing around the reed seemed fine and it wasn’t until I shined a flashlight

on it that I saw

the tiny gray hair stuck between the reed and the comb. A pair of tweezers quickly solved the problem.

Now, without my mustache gone, I just need to watch out for renegade eye brow hairs which may wanna sneak in there unnoticed

G’Day @HarpinBobbyMcB
Just wondering, can you buy that lovely blue and brown twine from any leading music store?

, no, this is a wonderful story from @HarpinBobbyMcB from a few weeks ago. I haven’t forgotten it …

This special edition is only available from him.

I forget who it was, but someone else here in the forum said the Lee Oskar was a moustache grabber and mine did in fact give my moustache a few tugs. As a side note, my ten blow went out in my Special 20, and I after opening her up, I found a renegade moustache hair to be the culprit

One of my Seydel’s grabbed a hair, and I don’t even have a mustache. I just hadn’t shaved yet that morning. Probably just the harp’s way of saying my technique could use a little work.

Very nice review @HarpinBobbyMcB. I own Some Seydels, a couple Special 20’s, and a Lee Oscar, but can’t say I have noticed significant differences between them. All feel and sound like quality harps. Perhaps as I gain more experience, differences will become apparent.

Just wondering, can you buy that lovely blue and brown twine from any leading music store?

So glad you remember the story @AstridHandbikebee63. The short story is I lost one of the sleeve nuts on my 008k and stripped the other, so now I keep it together with this fancy twine and/or various colored rubber bands depending in my mood.

I think we are in the same boat @PineComb, once I get more consistent in my bends and better at second position, I’m guessing the differences between the harps will be more noticeable. For now I’m just digging playing along with the radio and learning melodies in 1st position

Interesting post. For what it’s worth I’ve played a lot of brands, Hohner, Seydel, Suzuki, Lee Oskar, Bushman (still miss the Soul’s Voice & Delta Frost) Golden Melodies are a favorite Hohner but as I replace harps I buy Lee Oskars much for economic reasons (they seem a bit tougher to me, and with readily available reed plates). I’ve never seen an EastTop. I play mostly amped cross-harp and believe mics & amps have more to do with the sound than brand of harmonica. – Keep those whiskers trimmed!

I’ve not yet taken a microphone or an amp to my harps, don’t want to scare anyone just yet!

I can imagine though that for those who play well that it makes all the difference in the world.

Thanks for your thoughts @Trapper, I love sharing my new passion with all y’ all!

Dam! I’m sure there would be a market for them. Could put Hohner and Lee O out of business!

Since I live in a third world country where delivery and options for buying new harps is limited, I had to either learn how to fix my harp or do without!

I have an older Bushman Delta Frost, but recently I found that they still are in business, but moved to another state. They still make the Delta Frost (which happens to be my favorite harp). They are a little less expensive than the Special 20 or the Lee Oscar.

Hey thanks, Poppo, I looked 'em up and am glad to see them. Looks like the Delta Frost is re-designed from the old style I still have. Hope the quality is still there and I aim to find out.

Let me know when you do. I bought the Delta Frost and a Hohner Sousa Band at a local music store probably 8 or so years ago. I think the only thing I noticed different was the location, located on both cover plates.

What kind of mic and amp do you use?

I bought a Delta Frost within the last few years and it’s quality is excellent. Personally I prefer SP 20, Golden Melody, Crossover, or Lee Oskar.

But no question Delta Frosts are great harps.