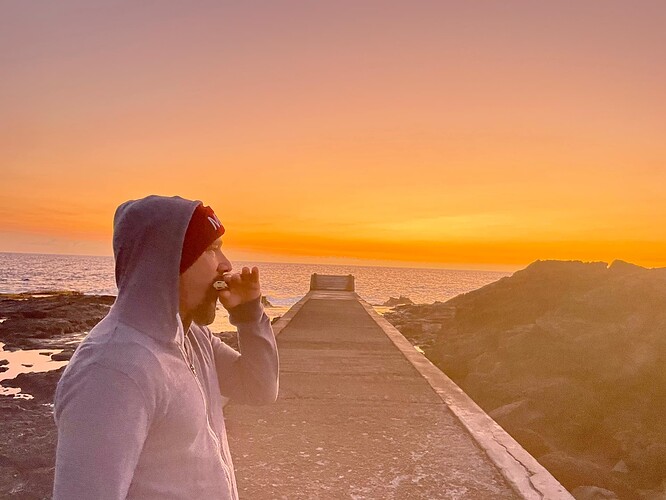 I’ve had an incredible passion for music ever since I was 2 years old when I heard Hit the Road Jack , by Ray Charles, blasting out of my dad’s record player. I still remember watching the record spinning around, feeling total ecstasy, “WOW! This is IT !”

My requests for a drum set were never answered, but finally when I asked for a guitar, my parents sprung for one and I was hooked. I played guitar in many bands in high school, and then my friend taught me to play harmonica, and I got good enough to start playing some gigs.

As high school drew to an end my parents asked, “Where are you gonna go to college?” I thought to myself, “ I dunno. Where do you go to become a rock star?”

I discovered that Oberlin College in Ohio would let college students take classes at its conservatory, which was perfect for me since I wasn’t good enough to get into the conservatory by audition.

When I got to Oberlin I was no longer the big fish in the small pond, and I felt I had to practice so much to “catch up” to the other guitar players. By the end of the first year I’d developed a severe case of Repetitive Stress Syndrome in my fingers - forcing me to stop playing guitar altogether. I was DEVASTATED

BUT that’s when I really started delving deeply into the harmonica. I began trying to copy the blues masters, figuring out how to play things on harmonica that I’d used to play on guitar, learning Irish fiddle tunes, you name it, I was exploring it.

I found, for whatever reason, that I developed a spiritual connection with the harmonica. Maybe it’s because it’s played with the breath. Or maybe it’s cos it saved me from a life devoid of playing music.

I began to notice that when I’d play harmonica the atmosphere felt magical . And when my life hit some hard times, making that magic became even more important to me. Like when I was going through divorce and bankruptcy, I remember pulling the car over and playing into the wee hours of the night.

I’m grateful for how the harmonica has changed my life. I can’t imagine life without it. I hope you never have to go through anything that painful in the future. But I hope that you do get touched, like I have, by the magic of the harmonica.

I know what you mean about Ray Charles. My favorite was What’d I say and Georgia On My Mind. I visited Oberlin many decades ago but the kid went to Case Western instead. What you say about harmonica is what I feel. I ignored it until I was 50 thinking it was a toy rather than an instrument. How wrong I was

The harmonica sure is a magical instrument

Ps frame that pic and hang it on the wall!

I too felt a pull to music when young. Besides drawing and cartooning from the time I could hold a pencil, seeing The Beatles on screen made we want to make music. In high school I persuaded my parents to get me a drum set, and played in a couple of garage bands. I came to a point in my 18th year when I had to decide between a career of drumming or of going to art school and getting into fine and commercial art. (The difference between a fine artist and a commercial artist is, the fine artist live to paint, the commercial artist paints to live.) But my parents would pay for art school, but not for a full time dream of being a rock star. Had to sell the drums. Anyway, I always had music playing while creating art. And Music got me through a divorce and a bankruptcy also. Now that I am twice retired and have some time on my hands, I have found the harmonica, and fortunately harmonica.com and Luke. Thank you Luke.

Great story! Older sister played the Beatles, Judy Garland, and lots of soul music. I loved listening her old 45’s on the phonograph. Wish I have would have began learning any musical instrument at that time. In those 55 or so years I may have become pretty proficient at the harmonica.

It is kind of you to share stuff like this. I also feel harminica is more personal than say playing piano and so much more portable. Without trying to sound too new wave psychobabble it is also forced deep breathing and complete mindfulness. The controlled deep breathing is what’s so beneficial for any anxiety. The mindfulness comes in the lessons. Maybe when you can really play its possible to drift off mentally and think about your troubles but for a learner the concentration is all in the moment. It’s ALL good.

I love this explanation of how the harmonica

The harmonica has also changed my life and though my own transformation through music has been much more recent, I’m sure many can connect with your story, as I have.

This article explains Mick Jaggar’s own experience with the harp.

I thought about you @Luke when Jagger talks about how difficult it can be to teach someone how to play the harmonica. You excel at this fine art

and for this all of us here are grateful

My grandson recently first blew his first notes on the harmonica and it was amazing to see how he lit up when he realized he was able to make noise by simply blowing and drawing into my old C harp with a blown 4 draw. He doesn’t seem to mind the lacking notes and I’m thrilled to help him get started learning a “language” which I am just now learning and wish I had learned a long time ago. 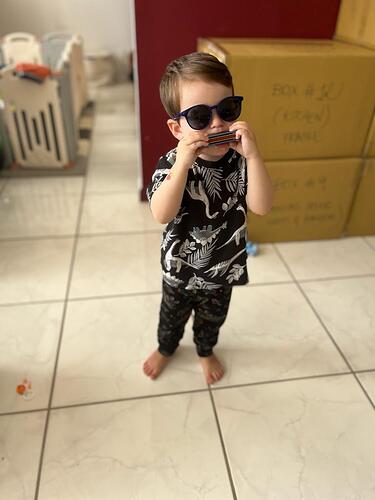 Music seems to me to be very much like an entirely different language which enables to communicate with others around the world regardless of our spoken language.

Learning more about this language which has always been around me and I have always heard but not fully understood, has been incredible!

So nice to share similar experiences with all y’all

Hello @HarpinBobbyMcB,
That is beautiful! I’m just imagining grandpa teaching his grandson to play the harp.
You could see what happens when you start doing this as a kid and be so proud. It would also support you and who knows, maybe

It would be so great!

Aw, thank you my brother. Great post. Thanks for sharing.

I’m right there with you Toot. The deep breathing is so good for relaxation and mindfulness, even away from the harmonica. But harmonica makes it EVEN BETTER.

Hey Blazing Bobby. Good to hear from you man. Great post. Love the pic of your grandson!!

When the black dog has hold of your ankle

and he’s chewing right down to the bone,

when you’re sleeping alone in your own bed

But you’re a very long way from home.

The night sky smothers your breathing.

The mornings bring even more loss.

You can pick up your trusty Lee Oskar

With something so small on your lips

you feel only the plastic and tin.

But playing it brings back the lost peace.

As the breathing smooths out what’s within.

The sound can be loud or dulcet.

The tune can be old or your own.

But the music will take you to somewhere

the dog doesn’t find you alone.

TOOOOOOOOG. BADASS. I’m FEELIN’ it yo!!