@KeroroRinChou, please @Name the people you reply to.
Thanks very much! It helps to be able to match the answers to the posts.

Hi , I’m Matt and I’ve been on the forum for a while but didn’t introduce myself. (Rude of me) I’m currently semi retired and been playing harp since my mid twenties. I started out with 3 Marine Band harps and a couple of Jon Gindick’s books and after 2 or 3 months I started attending open blues jams in Rochester, NY. I became friend with the harp player for Joe Beard and the Blues Union. Jon used to think up excuses to sit out a set at their gigs so Joe would let me sit in. About a year after I left Rochster I met Lyndon Gates and became the harp player for the LJ Gates band. We rocked a lot of bars in Central New York for about 3 years. We were the first band to play at the first Chenango Blues Fest ( back in the early nineties. I got some good news this summer when the festival committee said they’re considering asking us back to open the thirtieth fest in 2023.
More recently I was playing with the Mick Sharp Band here in Crystal River FL. Sadly Mick passed away this year. I occasionally play at blues jams in Ocala FL now. (Just keeping the lips nimble).

I’m enjoying being part of this forum. I love reading what everyone is up to and seeing so many people from all over the world learning harp. Keep on harping and as Paul Butterfield used to say, " Hey man, blow your face off." Peace

Hello @explorermatt,
I say to you, welcome, now officially.

It’s great that you’re officially making yourself known here. You already know us and have seen how harmless we are. We just want to play (harp) and it’s like a box of chocolates, you never know what’s in it… (sorry for the slight twist on Forrest Gump).
I’m thrilled to read about your development on the harp. Very exciting and impressive. It makes me curious!

Hi Astrid, what are you curious about?

@explorermatt,
I would be very happy if you would introduce us to your playing on the harp.
We beginners can always learn a lot.

You develop preferences and techniques while playing. 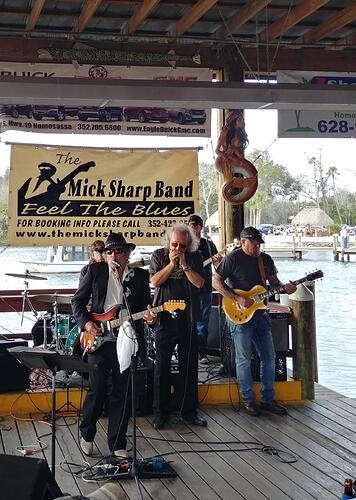 I only have one video of me playing, at a blues jam, and I can’t seem to share it here. Unauthrized file?

That would be a pity @explorermatt.
Unfortunately, I don’t know much about sharing videos other than Youtube.
Maybe someone else here has an idea?

This platform only allows for links to videos from forum mems. It allows for extremely short videos in the format of a GIF or similar but otherwise you have to put your video on something like youtube or tiktok and send the link. I am not in anyway advising you to do this.

I am not in anyway advising you to do this.

Hi all from (occasionally) sunny England.

I’ve been on/off dabbling with Harmonica for the last 5, maybe 6 years since my wife bought me a harmonica as something fun to mess around with as at the time I’d been reminiscing over the time I played guitar in my teens and missed creating music.

Fast forward to today where despite being a time strapped father of two young kids I’ve decided to finally revisit the harmonica properly and commit to learning rather than simply noodling around. I’ve signed up to the Beginner to Boss course and am really looking forward to getting going.

Welcome to the forum ! If you ever have questions concerning harmonicas or harp playing (or if you just want to “chew the fat” with us) then this is a great place to be to get answers or make connections with other future harp legends.

Hi Mikey
I am about half way through the course. I’m progressing slowly. I don’t have any musical experience other than dancing which helps with the rhythm. I have found the course amazing and fun. The people on the forum are helpful and a mix of incredibly experienced right down to beginners and everyone in between.
I also don’t get enough timecto practice but I try and its relaxing. Your kids will probably enjoy it and what a great example for them.
Nita

Hello @MikeyJay,
Also from me a warm welcome to the forum.
You write that you missed some time to learn to play the harp?
Buy two more harps and bring your kids as soon as they are preschool.

Have fun with the BTB course, it’s worth it!

Thank you @Slim @toogdog and @AstridHandbikebee63 for the warm welcome and kind comments.

It sounds like I’m in the right place and in good company too.

@AstridHandbikebee63 funnily enough my eldest (I’ve got a 3 and a half year old, and an 8 month old, so I live on coffee…) has a children’s harmonica already - one of the plastic ones with just 4 holes.

@Bushman_Music! Hi John! What an honor to have you here man. I have played your Delta Frost harmonica and find it to be a fantastic harmonica.

What kind of style do you like to play/teach?

@explorermatt wow so cool to get more of your back story. Thanks for sharing bro!

Yeah the only way to share vids on the forum is YT links. (If you don’t want the vid to be public on YT, you can keep it private, share the link here, and only people who click from here will see vid, if that makes sense?)

@MikeyJay welcome to the forum. So glad to have you here! I have a 3 year old and one on the way! (And one I just dropped of at college, lol.) So I’ll be living off coffee like you in a few short months!

So glad you’re doing Beginner to Boss! Welcome to the forum.

Thanks @Luke and congratulations on the incoming bundle of joy/sleep-deprivation.

Really happy to be here and am looking forward to working my way through the course.

Hi Luke and all members.

I’m in the UK and just signed up for the beginners course and so looking forward to play the harp like a boss.