Wilde Rock Tuning (What Will Wilde is Playing on Free Bird)

OK, since my last email I did a little piece on Will Wilde’s Freeeeee Birrrrrd solo I’m getting a lot of people having problems navigating to where to purchase a Wilde Tuned 1847 on the Seydel site. I get it. The site is a bit wonky. This is the basic link:

Notice in the screenshot below, the dark grey box on the right side of the photo has a drop down menu for “Tuning” where by default it will be “Richter” and you’ll need to press it and choose “Wilde Rock Tuning” 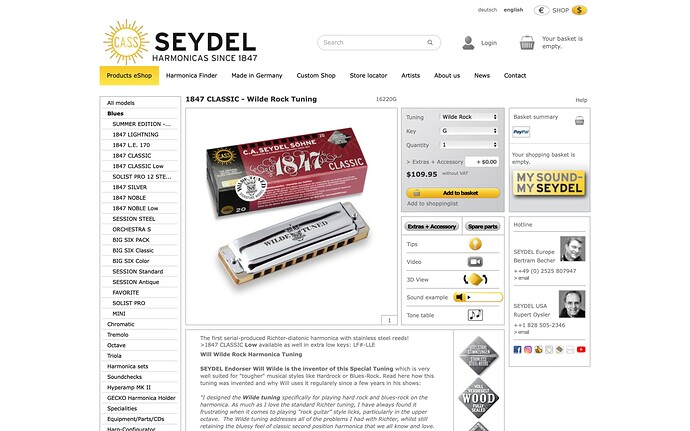 Oh, and if you haven’t seen the video I’m referencing, you’re in for a treat! 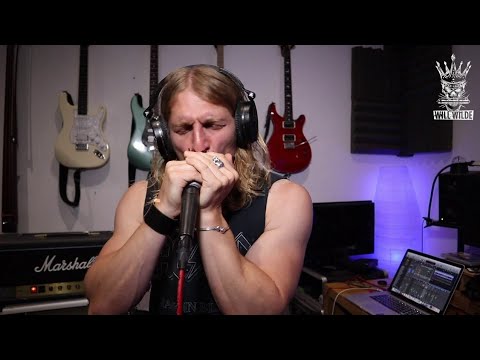 For those readers who find the 1847 Wilde Rock harp too expensive, look back at your (i.e. Luke’s) picture and on the left side is a list of various products (Luke had selected the category Blues). Near the bottom of that listing you will see the entry Specialties that you should now klick.

The screen will reload with the entry Specialties opened up on the left side of the screen. In that opened list you can find the entry Wilde Tuning which you should now klick.

Then the screen reloads again and you get all of the offerings of Wilde Tuning harps and sets of them, including the Wilde Minor Tuning harps. You will notice that the Session Steel models are about 30% less expensive than the 1847 models.

So I guess you will be buying a set of five?

Just kidding of course, @Dave_Dunn – but you do get a discount over buying 5 separate times …

Oh yes, I’m definitely getting a set of 5 very soon!

Once the paperwork for the life insurance for both my wife, and myself, clears, and I’ve had my new Will legally witnessed by a Justice Of The Peace, I’m clicking the “GO TO CHECKOUT” button!!!

Hey Slim - that’s so ironic, because I chose the 1847 based on your advice that they’re much better than the Session Steels, but also because of a mistake I made:

I had thought the PowerBender tuned harp I bought was a Session Steel (because it has an orange comb) but when I went back to it again, I realized it’s actually a KONSHENG! LOL. I have a key of G PowerBender (Konsheng) and I don’t like the way the -2" sends on it. Also, adapting to the tuning has been very challenging for me. I think it’s more intuitive for flautists than guitarists?

On the other hand, my WildeTuned 1847 arrived yesterday and I LOVE IT!! I mean I love the way it sounds, the responsiveness, bendability, and I really love Wilde tuning, man!

This harmonica takes the “To sound great in 2nd position draw-more-than-you-blow” principle to the NEXT LEVEL! If only I could inhale forever and never run out of room in my lungs!

My only complaint is it’s the tin sandwich style, and I was having so much fun, I played for about an hour without stopping and that reed plate really made the inside of my bottom lips sore. Both lips, but especially the bottom for some reason.

I’m guessing the Session Steel might be easier on the lips in addition to being cheaper. What do you think @Slim?

Yes, if you bought your PowerBender directly from Mr. Power then you get a Chinese harp (he has switched sources but I believe Kongsheng is his current source). To get a Seydel model of any of the Power Tuned harps I think you must order from the Seydel company.

On the other hand, the Wilde Tuned harps that you order directly from Will Wilde are Seydel models.

I’m guessing the Session Steel might be easier on the lips in addition to being cheaper. What do you think @Slim?

I am pretty sure that would be true, Luke. The Session Steel has the recessed plate design. I personally prefer the 1847 design and wood comb (with its slightly larger holes compared to the Session Steel comb), but each person will have their own preference here. I also find that the 1847 models are louder and project the sound better than the Session Steel design – but playing into a microphone eliminates that difference.

I was pretty certain that the Wilde Tuned harp would be just the thing for you! Glad to hear that you like it so much!!

Yeah you’re right on BP’s Power Tunings - you can buy either Konsheng or East Top from him directly, but as you mentioned Seydel makes those tunings as well.

As you know I have a PowerBender. I don’t know if I’ll even bother trying the PowerDraw now that I’ve fallen head over heels in love with the Wilde Tuned. I do think I’ll try a Session Steel Key of A so I can compare both comfort, and a lower key (with I expect I’ll like even better than the key of C.)

There are so many blues rock guitar riffs that I’ve always wanted to be able to play on harmonica, and now all of a sudden I CAN! Thank you Will Wilde!

So I agree with you

on the benefits of the Session Steel:

And I also agree with you

A good comparison in the Hohner-verse might be the Crossover compared to the Special 20. I’d take the former over the latter any day of the week (another big price difference there though!!!

I have not had any more issues with my lips hurting from the 1847. I think I was a bit manic when I first got the Wilde Tuned 1847 and the bottom line is I was just playing it so long and so ferociously. (Even comfy harps can make my lips feel slightly raw if I play them for 4 hours!)

I like the 1847 Classic so much, I’m curious to see what my experience of the Greg Jones Modified 1847 Silver is by comparison. I just ordered one (standard tuning.) As you may know, I’ve been a bit tough on the Silvers in my reviews because of the lack of responsiveness in -2 and -3 (probably easily correctable but as you know I’m lazy

Greg said “These days Seydels are coming much better out of the box which is why the setup is so cheap.” Also, to be clear, I’m not asking for an Overblow/Overdraw setup (I’ll explain why on that thread.) Depending on the key and the setup he did say it could run in the $30-50 price range for the work. Still seems pretty affordable (in the context of this type of instrument and modifications.)

I’ll make a post about it in a separate thread once I receive it and have some time to put it through it’s paces.

But suffice it to say that Wilde Rock Tuning ROCKS HARD and that I prefer the 1847 Classic over the Session Steel.

Thanks for the update, Luke @Luke !!

Keep us informed about the 1847 Silver from Greg Jones. If it pleases you then I will be tempted to give one of Greg’s harps a chance to convince me as well.